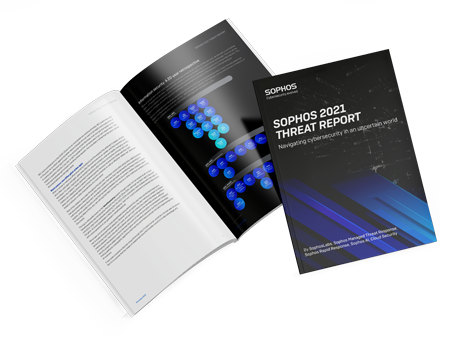 The Sophos 2021 Threat Report explores this year’s key cybersecurity developments and their implications for the year ahead.

With insights and analysis from Sophos security researchers and threat hunting experts, it provides a unique, 3D review of the cyberthreat landscape. Topics covered include:

It’s free and doesn’t require to complete a form to get access!

The Power of Sharing

The Sophos Threat Report talks about the “power of sharing” – meaning to share threat intelligence more comprehensively and get better connected. It’s also a great idea to share this report with your customers and prospects. You can download a co-brandable email template from the Sophos Partner Portal or share the link to the report via LinkedIn, Twitter, Facebook and co.

Don’t forget to add your Lead Referral ID though. This way we can give you back every lead created. ‘Wait, you said the Threat Report doesn’t require a form?’ you probably think. And you’re right. However, the Referral ID sets a cookie and whenever your customer or prospect comes back to www.sophos.com and eventually completes a form for a product trial etc., this lead will get routed back to you.

What You Can Expect

To wet your mouth a bit more, here are the key take-aways from the report: