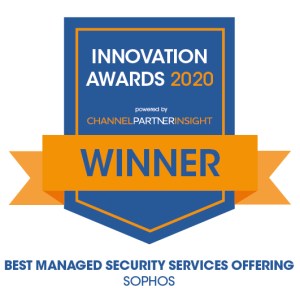 We’re proud to announce that Sophos Managed Threat Response (MTR) has been named Best Managed Security Services Offering by Channel Partner Insight. Sophos MTR is a winner in the Channel Innovation Awards, which honor organizations for innovative offerings that advance the managed services market into new opportunities and growth.

“Cybercriminals and other threat actors are unrelenting and unmerciful as they continue to target operations of all shapes and sizes, and as evidenced in the Sophos 2021 Threat Report, attackers will continue to get bolder and smarter in the year ahead. It’s critical that organizations – and the partners that they rely on – can not only detect increasingly evasive threats, but also respond to them quickly to minimize harm,” said Joe Levy, chief technology officer at Sophos. “Sophos has long led the industry, and is widely recognized for setting the standard for channel-optimized cybersecurity. Now, we’re tearing down barriers to proactive, human-led security operations, making managed detection and response (MDR) and incident response services available to businesses of all sizes. Sophos’ managed security services answer a growing market need for always-on security, and enable partners to easily start or expand their existing offerings.”

Sophos MTR is a fully-managed threat hunting, detection and response service that fuses machine learning with human analysis for an evolved approach to proactive security protection. It combines Sophos’ consistently top-rated endpoint protection and intelligent EDR with a world-class team of experts to neutralize the most sophisticated and complex threats that can go undetected. Launched in October 2019, Sophos MTR is now one of the industry’s most widely used managed detection and response (MDR) services with more than 1,600 customers, standing apart with its ability to proactively take action on an organization’s behalf to mitigate threats in real time.

“Despite facing adversity, the winners at the Channel Innovation Awards are a testament to how MSPs and the vendors that support them can be a force for good for their customers and wider communities.”