Chasing down attacks through cloud environments can be tough if you don’t know what to look out for, and sometimes, even if you do. That’s why we’re pleased to announce the integration of Cloud Optix data for AWS environments into the Sophos Extended Detection and Response (XDR) platform, with easy-to-follow queries to help while investigating incidents in AWS.

Improving threat detection and response in AWS with Sophos XDR

Thanks to its integration with the AWS CloudTrail service, Sophos Cloud Optix can collect and analyze data from across an organization’s AWS environment. This allows security teams to efficiently identify attacker techniques used to gain entry, maintain access, and exfiltrate data. Activity that could otherwise be missed. 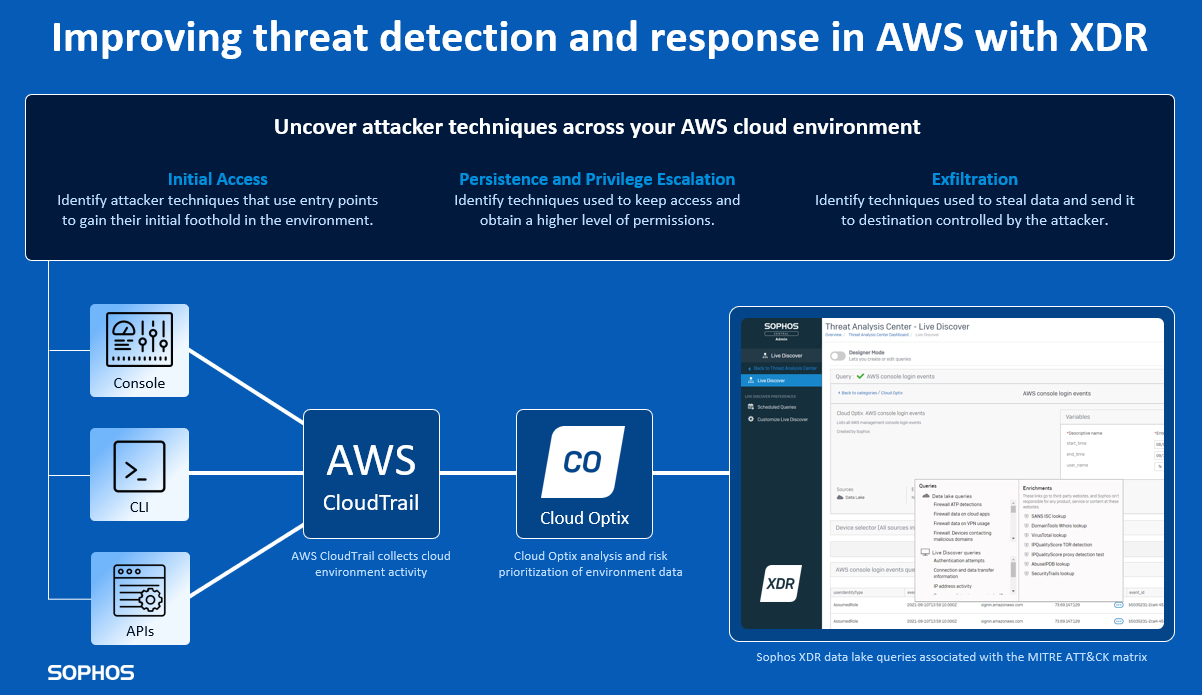 Breaking down this Sophos XDR release

Use extended telemetry to detect activity

Investigate and respond to incidents with greater accuracy

Helping teams see the bigger picture during investigations from one central console helps them to quickly identify risk and possible compromise. Cloud Optix data in Sophos XDR unlocks more value from AWS CloudTrail alerts and helps analysts more efficiently query the attack paths an attacker may take once they gain access to an AWS environment.

Examples of Cloud Optix detections include multi-factor authentication (MFA) being disabled for an AWS IAM User, changes to AWS EC2 instance snapshot attributes that could allow resources to be made publicly available, or data exfiltration from AWS EC2 instances. Teams can then pivot in the same console to enrich their investigations by running additional queries such as IP address activity, ATP detection, and third-party threat intelligence lookups to act where needed.

To get started, your customers will need Intercept X Advanced for Server or Endpoint with XDR, and Sophos Cloud Optix Advanced with AWS CloudTrail enabled.

You can find out more about how Cloud Optix enables IT teams to proactively protect cloud environments at Sophos.com/Cloud-Optix. From there you can try for free, resell through AWS Marketplace, and learn more about Sophos XDR for cloud workloads.

Responsible for Product Marketing of all Email gateway solutions, Rich got his break building marketing strategies for tech startups and VARs within the IT and telecoms industry, and most recently spent 7 years in the IaaS industry, leading Product strategy and Product Marketing for a premium brand within Europe’s largest hosting provider group.